Background
Mont Ventoux is 1912m high and has a prominence (height above the surrounding ground) of over 1,600m. It stands alone, hence the its large prominence, and has been a mountain used on many occasions by the Tour de France. It is revered by cyclists, including me. We were on Mont Ventoux in 2002 (Lance someone won that day) when the tour passed and we saw Robbie McEwen battling his way to the top and what was eventually to be his first Green Jersey (sprinter’s jersey).
The road up is 21km from Bedoin and averages out at 7.15%. This is reasonably difficult for those of you who are not familiar with cycling measures. This was also used for car races (hill climbs) since 1902 to 1975 when it became too costly and the big racing teams turned to circuit races. The first ascent by automobile took 2 ½ hrs, the record in just over 9 mins by a formula car. Horse and buggies took around 6 hrs and the average top cyclist takes around 1 hr. The fastest cycling time recorded in 55 mins (and something) by Ivan Basso. Average cyclists take around 2 hrs. I left may Garmin in the hotel, so I don’t know what I did. 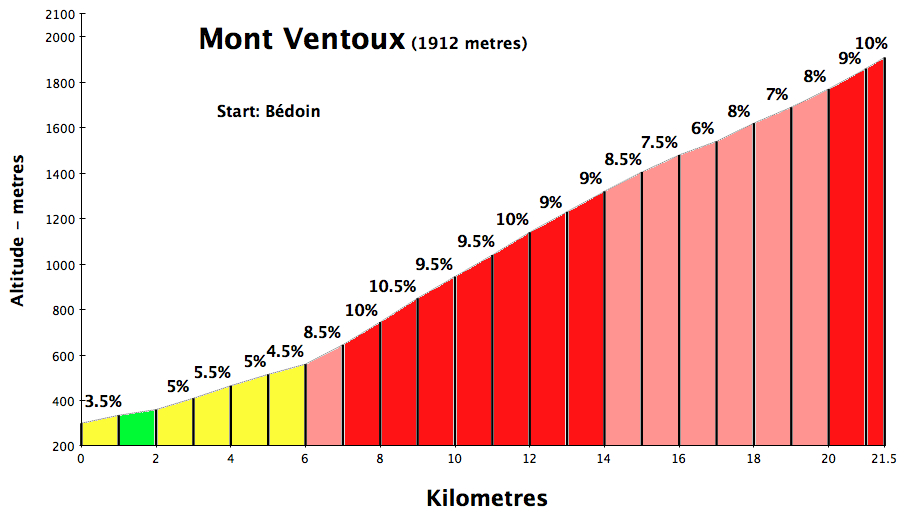 There are many great battles on the hill, but the greatest (and saddest) story is of Tom Simpson who died less than 1 km from the finish, during the 1967 Tour de France. Tom was a top British rider, who died still clipped into his pedals. Just fell sideways and died. The autopsy showed levels of strychnine and amphetamines in his blood, the performance enhancing drugs of choice back in the day. A sad story. Check out the photo of his memorial somewhere below in this blog.
The day
Weather was supposed to be stormy in the afternoon, so I wanted to head off early. After my problems on the Isle of Arran, I wanted to make sure I had a good breakfast, but as the hotel breakfast didn’t start until after 7:30, I would start around 9:00 or 9:30 at Bedoin. Not a problem, I had to assemble the bike.
I was rushing around and forgot the Garmin/Strava – so did this ride really occur? In the bike world, if it’s not on Strava it didn’t happen?
The travel from Carpentras where we were staying was uneventful, but there was an event which was taking over the town of Bedoin and so it took me some time to follow the deviation signs to get to the start of the climb. It was therefore a late start at 10:00am and the sun was hot.
The ride
Started off well but I was losing moisture at 1 drop every pedal stroke, keeping hydrated was going to be important. Climbing the lower slopes was relatively easy and it was a nice warm up before hitting the steeper slopes. As I didn’t have my Garmin which records distances, speed and elevation, I was lost as to how far I had ridden and more annoyingly, was I struggling because it was steep or because I was not in condition for climbing hills? On this latter point, I had tried finding hills around Glasgow, but there aren’t any really long ones close to Glasgow. Also, I hadn’t ridden the bike for the time we were away in Greece, Austria and Holland. I rode 5 times in Glasgow and once in Lyon where thankfully there was a 10 – 12% hill, but that was only for 1 km and I struggled up there.
It was going to be a long day. 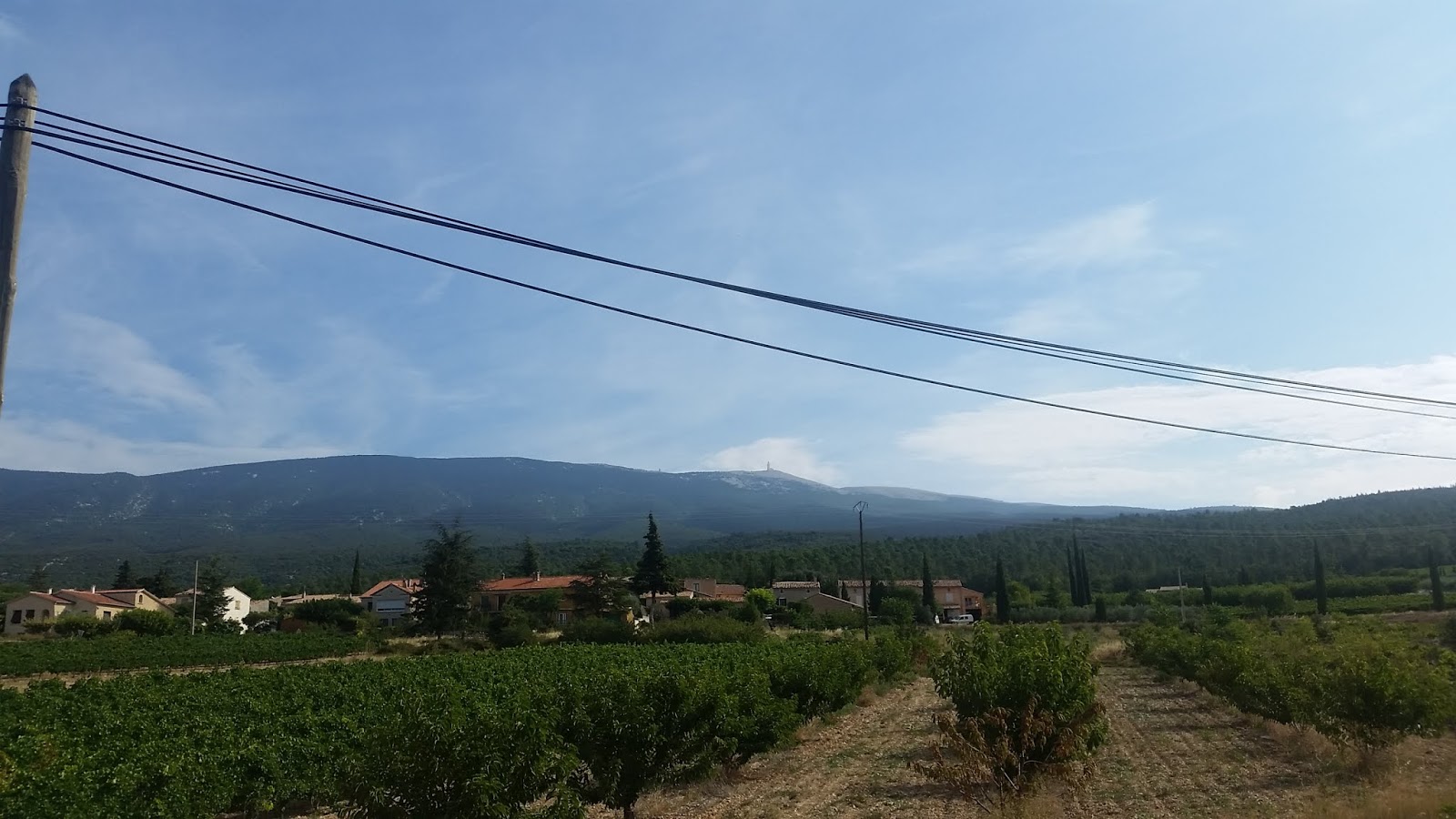 After going through the vineyards of the lower slopes, I entered the forest park and started to really hurt. Doubt was setting in as to whether I could reach the top.
Tangent for those who do not know a lot about bikes. Going up hills is easier if you have a set of gears suitable for going up hills. My bike has gearing suitable for going fast in triathlons, which are mainly flat. See the problem I faced? At 5 or 6% gradient, my bike would be good, but not a constant of 8 to 10%.
The climb is relentless. There are no flat or downhills to lower your heart rate or ease pressure on the legs. It is always up. I was continually passing other riders as I needed to keep my speed up, but I could only do this in short bursts. So my strategy turned to resting at intervals and recovering, then off again. I was looking for the corner where we waited for the 2002 Tour de France, I found the series of corners, so pulled over on the pretence of taking a photo. I had just passed a group of three, and they were really struggling. They were Dutch and were not used to riding the hills. Had a nice chat with them, but as I was reinvigorated, I soon headed off.
My next stop was at a photographic display of the cars which raced here. Fascinating. I spent quite a while there reading the material so I could enlighten you all with those fabulous facts earlier in the blog.
After a considerable time, off I headed again. There are bins for riders to dispose of their rubbish, you know, things like energy food wrappers, excess steroids, etc which is a nice touch.
Tangent: Cycling racers did have a bad reputation for throwing these things away, so the cycling community have been on the offensive to stop the rubbish being thrown along the race route. So now they have designated areas for riders to empty their rubbish and there are dedicated staff who then collect the rubbish. Nice.
These bins have the distance to the next bin, which were sometimes up to 5km between bins and these became an ideal target for gauging the next stop.
After a while I noticed that there were roadside markers with some good information to help me like, distance to go, gradient, height above sea level. Yay, some information at least every kilometre. Off the bins as a measure, the roadside markers were far better. Shows how much I was looking at the metre of road surface in front of me, not even looking to the side.
To cut it short, I was struggling until the café at Chateau Reynard where I filled up my water bottles and bought an energy gel (yes, I forgot those as well as energy drinks). The guy in the café said that I had done the hard work and the 6kms to the top was pretty ease. And I think he was right.
Once you are out of the forest (basically at Chateau Reynard) you are above the tree line and there is simply only white rocks (which look like snow from the bottom) and a view of the summit tower. The summit tower is weather station built 120 years ago and it is massive. You can see it from everywhere, except when it is in cloud as today was.
I missed the view, got a bit of rain for about 30 secs, but it was so sweet to get to the top of one of the climbs of the Alpes. It is tough and at times felt impossible to get there, but I did it and I feel pretty good about that.
Back down
Riding down, the cloud cleared on the north side of the mountain. This gave sensational views of another route up Mont Ventoux. A photo in the blog shows the road snaking its way up to the top. I may not have got the view from the top nor a clear view of the road I travelled, but that road was simply gorgeous. May be another trip?
Anyway, back to getting down. It was a lot easier down than up, that’s all.

ED Note:
Glenn is meeting up with Celine in Lausanne Switzerland to race the World Triathlon Champs at the end of August, he had planned a European holiday with his wife before making the trip, we wish him well and hope the race goes well.